“Beyond every door I hear your voice saying to me, ‘This is only the land of shadows. Real life hasn’t begun yet.'”

There is no day in which it should be inconvenient to open blind eyes. But to a group of powerless religious leaders, opening blind eyes required formal questioning. The blind man, who I imagine is trying to make the moderate out of his healing, answers questions about Jesus. The leaders embrace doubt and derision requiring a formal questioning of the blind man’s parents.

The parents give both an honest, yet safe answer. They don’t want to promote a miracle at the expense of socio-religious ostracization. The religious leaders give up on his parents because what they are after is the rejection and denial of a person, not celebration. When they don’t get the denial from the formerly blind man or his parents, they cast further doubt and cast the man out from their presence.

Then enters Jesus, and I believe Jesus’ timing is not late and is intentional. Because so often, when our eyes are opened or when a miracle happens, it feels like God leaves us be to see what we will do. Give an epiphany and go dark. Jesus goes through this in the gospels after his baptism. A glorious experience followed by a wilderness. Here a blind man’s eyes are opened and many are skeptical. 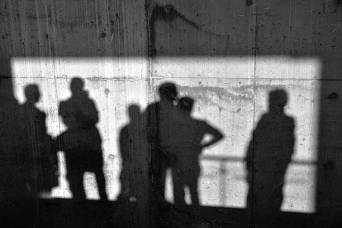 But this man not only has his eyes opened to the natural world; this man’s eyes are opened to the eternal reality of Jesus. So the formerly blind man worships Jesus when he reveals who he is. Some present Pharisees overheard what Jesus said and understand the implication that they were spiritually blind. They ask, “What? Are we blind too?”

And the chapter ends to set up a much lengthier discussion that Jesus seems interested in having with the contrasting religious order. He says, “If you were blind, you would not be guilty of sin; but now that you claim you can see, your guilt remains.” This theme is something that John, in his gospel, finds really important. He wants his reader to know that Jesus has compassion on his enemies, while the religious order despises the work of God.

The more miraculous the work, the harder the religious order tries to kill Jesus. We will see it again in the resurrection of Lazarus. In John 12:37, John wrote: “Even after Jesus had performed so many signs in their presence, they still would not believe him.” Their inability to see was a fulfillment of the prophetic utterance of Isaiah the prophet. Isaiah wrote, “He (God) has blinded their eyes and hardened their hearts.”

In chapter 12:45, Jesus says, “The one who looks at me is seeing the one who sent me. I have come into the world as a light, so that no one who believes in me should stay in darkness… I did not come to judge the world, but to save the world.”

Our intentions can be at times a little harder to place, a little harder to see. I’ve been fascinated by my own shadow recently. The closer I stand to a light source the larger the projection of my shadow is on the walls in my living room. My shadow can be either more imposing or less depending on my relation to the light.

But… Jesus on the other hand meets us. After the opening of our eyes, after the enduring of the ridicule or indifference of others to hearing our story, he meets us in the open and says, “I still see you, not your shadow, I see you; I see who you are and who you’re becoming. And I love who you’re becoming.”

In a world full of shadows, the light of God shines.

Just prior to  1991, a wrestler by the name of Jake “the Snake” Roberts was sprayed in the eye with cologne by another wrestler Rick “the model” Martel. Martel called his cologne “arrogance”. Martel used “arrogance” to blind Jake. I recount this lore because more than the cologne, the arrogance within us is a symptom of our blindness.

In John 8:48 the best accusation the religious elite can level at Jesus is: “You are demon possessed.”  They swing all the way left or right depending on which side they’re starting from. The point is they demonize the most holy man to walk the face of the earth. Pretty amazing, right?

After Jesus defends himself and offers eternal life to those who believe, the religious leaders are somehow more convinced than ever that Jesus has a demon by accusing him of being arrogant.

Jesus basically tells them he is God and he is greater than Abraham their forefather, so they get ready to stone him. But Jesus sneaks away.

After this, Jesus comes upon a man blind since birth and his disciples ask an interesting question: “Who sinned this man or his parents, that he was born blind?” The disciples don’t ask out of arrogance, instead they ask from ignorance, another symptom of blindness.

I’ve always found the question astounding. The disciples indicate that this mans blindness was given him at birth because of sins he would eventually commit. This reveals something they believed about the way the world worked. They believed a person’s future behavior foreseen by God could be met with punishment in the present.

Jesus doesn’t spend too much time giving heed to this assertion; instead, he lets them know that the mans blindness was not a result of sin, but it happened so the work of God would be revealed.  Jesus points to an opportunity for healing that the work of the gospel would go forth.

So what does he do? He spits on the ground, makes some mud with the saliva and puts it on the man’s eyes. Then he tells the blind man, “Go take a bath in the Pool of Siloam.” The blind man obeys and goes home seeing.

What follows the miracle is unfortunate. The mans neighbors and those who ordinarily  recognized him doubt he is the same man because they only knew him as one who sat and begged, not even as the blind guy. They attributed his identity to his dependence and to see him with open eyes was unfamiliar.

The man insists that he is the same man, yet he is different so they ask, “how were your eyes opened?” He tells them of what Jesus did but he does not know where Jesus is. What follows will be the subject of my next post, but spoiler alert, the man is subjected to more questioning and the doubt of others.

This is a familiar story, God does a miraculous work in a life but sometime after we no longer know where he is. We may even find ourselves in a position where a great many doubt this work, or doubt that we have been transformed and we allow the perception of someone else to affect us.

A popular quip recently is: perception is reality. That quip can only be true in a world without God, without anything absolute. Fortunately some or, more probably than we’d like to admit, most things have absolute truths. We might blur the lines enough to confuse them, but this man was absolutely healed of his blindness even when most people did not believe he was the same man or blind to begin with.

Perception is real but not reality in the sense that it has power to form our disposition, our character, our way of life but perception as an ability or a state is subject to influence especially when we are blinded. Perception can be an agent of change, but not an indication of the way things are or will be for eternity. Perception is a shadow to the fullness of the senses. Perception is in the thoughts, in the mind, not necessarily in the heart or evidenced by some concrete external.

At Wrestlemania 7, on March 24, 1991 “the snake” fought “the model” in a blindfold match. The wrestlers competed with masks over the head and blindly had to wrestle one another. During the match, the fans are so loud the wrestlers can only rely on the sense of touch. At one point Rick “the model” Martel slams a chair against a ring post supposing it to be Jake. His realization and perception change immediately when the shock of the chair on another steel object reverberates through his hand. The match ends when Rick backs into Jake and Jake snatches Rick’s head and hits him with a DDT, his finishing move, and pins him to win the match.

What I love about the story they tell in the match is the perception that the fans are somehow helping Jake find Rick even though it is just lots of yelling and cheering. Jake uses the crowd by pointing across the ring in different directions and based on how loud they are indicates what direction he should walk in, meanwhile Rick is fed up by the loudness of the crowd.

Here’s how you and I fit in. We have a great cloud of witnesses cheering us on in our pursuit of living for Jesus. Our eyes are never more opened than when we are relying on the Holy Spirit for our guidance and comfort. We will make it so long as our eyes are fixed on the author and finisher of our faith.