My favorite wrestling tag team ever was Demolition, you know the 2 guys with the metal stud outfits with face paint managed by Mr Fuji. They eventually brought in a third guy, Crush, for a short time and then faded out of existence. I liked them because my first memory as a child was seeing them at Survivor Series 1990 teaming with Mr. Perfect. The event was free around Thanksgiving time because of the US involvement in the Gulf War. My dad held me and I remember them walking out ot their rocking entrance music. I was almost 3 at the time so the rest is a blur, but I became a fan.

I learned later that Demolition was the WWF’s 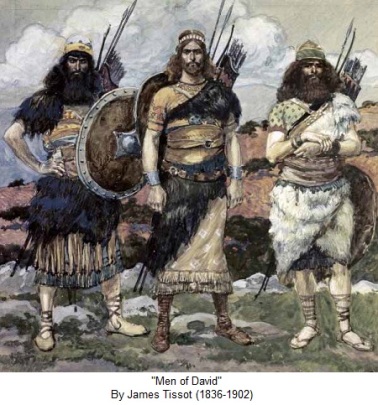 In ancient Israel, the most famous king of Israel was David, a shepherd boy who wrote songs, slayed a giant, and became king. He grew an army, more or less led by three brothers one of which, Joab clearly stood out among the 3. They were collaboratively known as the Sons of Zeruiah (Zeruiah means Pain or the tribulation of the Lord). Zeruiah’s sons distributed a lot of pain because they were warriors and usually merciless.

Rather than giving an all-inclusive summary of how these 3 brothers did King David’s bidding, I’d like to put forth a character study of these 3 brothers as compared to the 3-members of Demolition, starting with the least relevant.

Ax was a 3-time WWF Tag Team Champion with his partner Smash. He was at the height of his popularity in wrestling from 1987-1990. For the remainder of his career, he wrestled on the independent-scene in relative obscurity. Asahel was the youngest son of Zeruiah, was swift-footed and a valiant fighter. In the book of 2 Samuel chapter 2, he gets his five minutes of fame when he chases down Abner, the commander of a rival army. During the chase they have a shouting match reminiscent of a movie fight scene. It ends with Abner thrusting a spear backwards during the chase, which dealt a death blow to Asahel. Into Asahel’s stomach and out his back, he’s written out of the Bible. It’s a sad way to go out after achieving such heights.

Little did I know, my first memory and the first wrestling event I ever watched would be the last of Ax’s WWF television career.

Smash, likewise a 3-time WWF champion, had a slightly longer stint as part of Demolition teaming with Crush, but that didn’t work out well. So Smash went missing and came back repackaged as the Repo Man, a gimmick that fit in with the 1991-1993 era. His gimmick granted some decent moments of comedy, but he was usually not very entertaining in the ring. Repo Man was however, a character more motivated than his gimmicks in rival promotion WCW where he aimlessly worked as the Blacktop Bully and “Hole in One” Barry Darsow (this might work as a gimmick in 2017 though). Needless to say, outside of Demolition he was forgettable.

Abishai, the oldest brother of the Sons of Zeruiah, I wouldn’t say is forgettable. He was certainly famous among the army of Israel. He ventured closely with King David and achieved promotion in the ranks of Israel’s army, but he was not as polarizing of a figure as his brother Joab. Abishai was loyal but still violent. He avenged his brother Asahel with Joab by killing Abner. He with Joab killed King David’s son Absalom, when Absalom tried to usurp the kingdom. He was with David when the previous king Saul was trying to kill David. But he fades out of Scirpture, unlike his brothers whose deaths are recorded. Abishai stops being relevant for no real reason.

Irrelevance plagued Smash or Barry Darsow after Demolition, but he was still my favorite of the 3.

Crush was the late comer to Demolition but had better size and a better look than Ax and Smash, which is likely why his career gained mileage through the 90’s. He was repackaged as Crush of Demolition, to Crush, the Hawaiian surfer face, to Crush, a heel version Hawaiian, to Crush, in the Nation of Domination, to Crush, the leader of Disciples of Apocalypse. Then he left for WCW to wrestle as Brian Adams joining the NWO, then wrestled in a tag team known as Kronik, where he was a Tag Team Champion on 2 occasions. He wrestled in the spotlight for the better part of decade, but never really made it, nor can I think of a single match of his that was entertaining enough to be remembered. He died at 43 years old which is tragic.

Joab, the middle brother, and the most violent and scheming of anyone close to King David gets a lot of time in the Scriptures. In 2 Samuel, he is always with David, responding to his orders and then manipulating circumstances to shake David out of his depression. Joab was a shaker, he kept moving and kept things moving even when not for the better. As David is crowning the next king, Joab lands on the wrong side of the coin by siding with Adonijah, the son not chosen to carry the kingdom foward. David gives Solomon, the chosen son, a warning regarding Joab’s violence and scheming. He instructs him to take Joab out when the opportunity arises. In 1 Kings Chapter 2 Benaiah, another military officicer strikes down Joab at an altar for the guilt of the innocent blood Joab had shed throughout his lifetime. 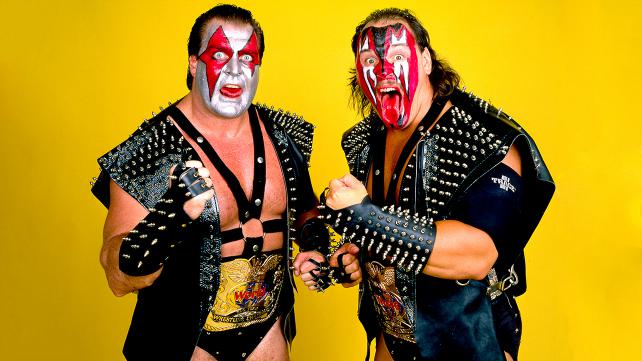 Demolition like the Sons of Zeruiah suffered a dissolving. At first glance it appears Demolition dissolved a lot more abruptly after their last title reign in 1990, but really their careers as great professional wrestlers suffered in some ways from drudgery. They may never see the WWE Hall of Fame, though I hope they do. But I also understand if they don’t because some things even if they seem good for a while should not be enshrined forever. The Sons of Zeruiah were sons of pain in the end they dissolved into dust but I would not say they were demolished. In fact, they helped build something that was good. Sometimes you helped build a legacy, and sometimes you are the legacy. These pairings were builders.