I’m not writing specifically about the 2nd amendment. And my intention here is not to lobby for change in the political arena. I don’t like loud yelling, whistle blowing or things that divide people unless it is over Jesus.

So I’ll talk about Jesus going to his death. In the gospels, one of Jesus’ disciples, Peter, takes a sword and aims for someone’s head. This happens as another disciple asks Jesus, “Shall we strike with our swords?” Before the inquiring disciple can finish the question, Peter is quick to pull the trigger and cuts off a dudes ear.

After the incident Jesus says, “Put your sword back in its place, for all who draw the sword will die by the sword.”

Why have a sword you would never use?

Why have the sword at all?

After Jesus makes the statement about living and dying by the sword, Jesus heals the mans ear who Peter had cut off with the sword. Then he says this in the gospel of Matthew 26:53 “Do you think I cannot call on my Father, and he will at once put at my disposal more than twelve legions of angels?”

Jesus makes an obvious statement to His followers. Being one with God implies He has access to an army but chooses to relinquish that power in the face of death. Why? Because he is fearless and faithful.

But more than any of that, Jesus is humble, self-sacrificing and willing to lay down his life in love. He was willing to lay aside his power to become a servant.

He laid aside power.

Why relinquish our perception of power?

Look, I get it, I’ve worked in construction on an off for the last 6 years. I shared an office with a guy who hoarded ammunition and had it delivered every day to our work. I understand lots of men and women like to shoot guns because it gives them an adrenaline rush or rather the false sense of feeling powerful.

I understand the normalization of guns and the perception that they can be operated safely and frequently by responsible individuals.

But what I don’t understand is the American Evangelical Christian fascination with guns and (about to a make a really unpopular statement) the military.

We idolize what we perceive protects us.

And it is our faith in thinking guns protect and faith in the military as exclusively altruistic that fuel a fascination with violence and the glorification war. As a country America has found a way to consistently make violence profitable. We’ve done the same with sex, and instead of considering the cost, we normalize.

We begin to recite a story that suggests, the rights we’ve “always” had are being infringed upon, and it is oppressing our freedom.  And we begin to use the word freedom as an excuse to fight, conquer, and finance violence disguised as virtue

But that insistence is the sign of how bound we’ve become. We’ve become bound to our guns like being bound to an idol.

Anyone in our culture who would rather have a semi-automatic weapon or hand-gun to maintain their own sense of security, at the expense of not being permitted to have one for the potential safety of the masses is looking to a conceal a pretty ugly idol.

How to Put Them Away

The disposition I advocate for among Christians is this: “I am willing to lay down my right to bear arms in hopes that others would also lay down that right, to live in a society where no child dies in a classroom from a firearm.” The 2nd Amendment says nothing  about laying aside our rights as a demonstration of love, but Jesus’ 2nd greatest commandment does. He advocates being inconvenienced for the love of your neighbor. 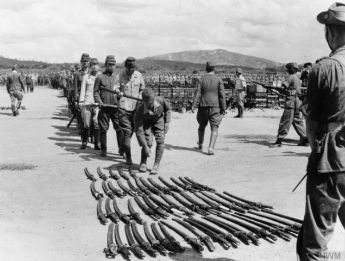 Jesus advocates for this to the point where He asks His followers to lay down their lives. Despite this, it does not seem  we are  even at a place where Christians are willing to lay down their guns. That must change.

I believe only a radical movement of surrender will change culture, not lobbyists or legislation.

And I believe the solution is rather simple: “Put your guns away.”

– Don’t resist stricter gun laws. In fact, don’t ignore the statistics, look around at the rest of the world and be willing to admit that maybe the events point to requiring America to have the strictest gun laws of any nation.

– Relegate that sense of power and adrenaline rush to highly secure shooting ranges.

– Regulate hunting rifles to be used or visible only during designated times of the year, the rest of the year those weapons are to be stored at a weapons bank.

– If we desire to hold to that 2nd Amendment piece about a “well-regulated” militia, have a militia bank/shooting range combo. If the goal is to be well-regulated, that’s the place you go to pick up your guns if the poop hits the fan and we have to wage war on the government.

I’m a pacifist, who has never shot a gun who has some great ideas.

Why it is definitely time

It’s time because we’ve lost our sense of urgency. This most recent shooting was forgotten quickly by the media because there was a Royal Wedding to watch. It also could be that a lot of people in Texas own guns and pushing  stricter gun policies would rub the majority the wrong way (which is what has to happen).

I admit I liked the Royal Wedding, but what I don’t like is the feeling I now have when I hear about mass shootings.

When Columbine happened, there was weight attached to it, real fear because it was unprecedented and admittedly no one knew what to do because nothing like it had happened. Our excuse was, there was nothing to compare it to.

Bowling for Columbine, produced and written by Michael Moore, actually made me think. Even if you fall on the side that it was a decent propaganda piece, it also explored what perpetuating an ideology centered around fear creates. That movie, made in 2002, was about a shooting that happened in 1999, almost 20 years ago. I’m fairly convinced that in 20 years the climate has gotten worse.

20 years later we have no excuse for being frozen in indifference or in the fantasy that my gun makes me feel more secure.

Fear creates a demand for entitlement until the mind gives way to the assumption that this was always mine. Once you’ve arrived, you cling tightly because the alternative is to live without hope or or the impression that you might lose power.

An alternative that will overcome is one that casts out fear with love. Love finds solutions and finds a way often at the expense or at a cost to the one who is loving. We lay down our weapons so our enemies ears might be healed. Or if you prefer you lay down your weapons so Jesus heals our ears.

Why it’s worth it

By now, anyone who would disagree and has continued to read could be thinking, “I’ve heard you; I’m empathetic or sympathetic, but even if I did lay down my gun, what if it doesn’t work? What if the solution is more about treating mental illness or arming more people and teachers?”

Teachers have bad days, the last thing I want when I have kids is to worry about them in school with a teacher they have consistently irritated who also has a firearm. It’s not that I don’t trust teachers, but why unnecessarily require people to be armed who already have pretty stressful jobs with my future annoying, hilarious kids.

Furthermore, who is to say a disgruntled student doesn’t get a hold of that gun. Arming more people in places that are meant to be safe is a horrible idea, make no mistake.

As far as treating mental illness, this is a much wider discussion and one that is essential, but we know far less about the human mind, then we know about guns. The mind of an individual by in large is something that we still cannot comprehend. Even with heavily medicating, a missed dose or the wrong dose can change things pretty quickly and often without much explanation.

Guns are the object we as people can control. It’s the object in the equation we can discard. It is the idol. We can’t discard people, but I fear that’s what we do with every cry we ignore.

It’s worth it because laying down your right to bear arms is a practical demonstration of love that goes beyond words. How often do we actually see events or decisions like that anymore? It’s a movement more powerful than a Royal Wedding. And it’s worth it for the Church to finally lead the charge in something worth writing about or covering by the media, rather than being lambasted for indifference or hypocrisy.

It’s worth it because through it, we can in part, fulfill the 2nd great commandment to love our neighbor.