“Well I left my happy home to see what I could find out
I left my folk and friends with the aim to clear my mind out
Well, I hit the rowdy road and many kinds I met there
Many stories told me of the way to get there”

Saw that Tom Hanks Mr. Rogers film yesterday. It was odd in good ways, nostalgic and started with forgiveness moving to generosity, then to kindness.

I’m not a movie critic but the films pacing was patient. It was the first time in a long time or perhaps ever, when I thought throughout the movie, “that’s who I want to be.”

There was a particular scene where Mr. Rogers is on the phone with this guy Lloyd (who the movie is really about) and says, “This conversation is the most important thing in the world to me right now.”

And I was reminded of Jesus and how the practice of patience and presence is what perfects us. Letting patience have its perfect work in the midst of testing and trial leads us to love. Jesus found opportunity in the pain while putting up boundaries towards evil ideologies and that which would try to cast doubt on His identity.

A major problem, perhaps not new to humanity is: the world would have us tolerate attacks and lies about individual identity by allowing people to self-identify, while they stumble through trial and pain until they forget themselves rather than find the Creator. Mr. Rogers teaches us, collective identity (the neighborhood) always informs, even may heal individual identity.

The difficulty with identifying on our own or in reaction to our pain rather than to truth is the distortion of self and a further movement into the depths of brokenness, even darkness. That’s why any attempts to gender reassign or maintaining a loose sexual ethic does not breed liberty. People become less recognizable, self-doubt increases, as does anxiety, and it always effects more than the self.

This, I believe, is why Mr. Rogers places the focus on the feeling. He says the feeling is real and he refuses to demonize sadness or anger, even fear. while celebrating joy with the sober knowledge that the other core emotions desperately need expression in order to remain tender in solidarity with creation.

How those feelings/emotions are expressed is our opportunity to become generous with our time,  recognizing time is a currency that none of us can buy more of. We can’t work harder or become more efficient to procure more time than someone else. All we can do is be more mindful how we spend it, how we express emotion in relation to the other.

“Yes the answer lies within, so why not take a look now?
Kick out the devil’s sin, pick up, pick up a good book now.”

Cat Stevens’ song “On the Road to Find Out,” is featured in the film and I loved Cat Stevens as a teenager. So much so that we had a stray runt of the litter cat that lived outside our house who I named Cat Stevens. He was 1 of 3 siblings but was the only one that would let us pet him and he had this tick where once you’d pet him, if you grabbed his tail as you pet him, he would immediately turn around and want to be pet again.

Cat Stevens, likely burnt by the music industry, perhaps burnt by the 60’s and 70’s and a bout with tuberculosis went on wild journey of self-discovery, landing in Islam. He is not American which seems important and might be the reason that his searching led him to obscurity rather than at a grasp for more popularity. That could likewise just be a socio-religious facet that also would separate Islam from Christian evangelicalism. Cat Stevens reminds me of the Sufi mystic poet Rumi in his lyrics that are usually spiritually searching, mixed with romantic hope, and familial reconciliation, all of which were within him, seemingly prior to his conversion.

Familial reconciliation with shimmers of romantic hope encompass the film as well, but spiritual searching is left on the outs, likely to keep it palatable for the masses.

Trying to make a non-controversial film where kindness and forgiveness is celebrated while still being of substance and quality and touching on little to no religious themes seems almost impossible in the current climate, but I think it managed well enough.

Lastly, sticking with the cat theme, there is Daniel Tiger, the disheveled puppet turned kids cartoon that bore an essence or life of his own through Mr. Rogers hands. Habakkuk suggests the hands is where the power of God is, and I would suggest the things we hold and handle are the things we animate. It’s how we get babies and toddlers to eat vegetables, by fooling them into thinking they are swallowing an airplane as if they are Godzilla.

There is a scene where Mr. Rogers puts Daniel Tiger on his hand and talks to Lloyd in Fred’s apartment. It seems silly until you realize why. Sometimes facing your pain in the imaginary realm makes it feel safer to face in present. It might just give you the courage to face the real place or person that has hurt us. 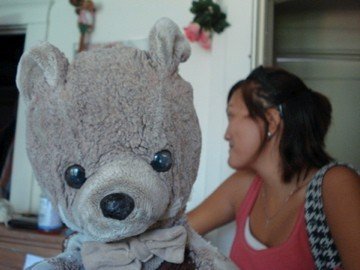 I had/have a bear. I’ve written about him before, Bosco, married with a child, who I shared a bed with until high school. When I was 16 or so he lived in my closet because I needed to mature away from him, until I went to college and brought him with me there as well. My junior year he married and my senior year he had a child. I talked to Bosco, Bosco had a voice and he was the expression of my lost innocence. He was the stuffed animal given to me my first Christmas by my great aunt. He was given permission by my kindergarten teacher to be brought to class whenever I wanted after my parents were going through a divorce. He is who I talked to about my confusion and who I sought for rescue when I could not hear God answer my prayers.

I wept on him, wrestled with him; he was the safe place for my anger and sadness. He was who I clutched when I was afraid. Perhaps, the Old Testament would label him an idol, but I did not worship him though I was desperate to keep him, and couldn’t bring myself to get rid of him. I created his family, which was large. He was the oldest which meant he could keep all the others safe.

If you did a case study of my relationship to this bear and my attachment to it, you could from our interactions trace pain and problems and could  likely rewrite a story that would have been much more picturesque if you just removed every occasion that would have led me back to this safety object.

Powerless, that bear, yet sometimes has felt safer than God. That bear is where I last left him and there have been times I have left him and had to rely on others to get me back to him. After college he came with me to my grandmother’s and then probably through the 10 moves season and even traveled to Charleston. Now he is at my brother’s in Chester. He hasn’t seen his family but once in probably 7 years.

Powerful that God, yet there is no better place than with Him, God has never left and there have been times I tried to leave Him and had to rely on others to get me back to Him. I hope to find more beautiful days to come with Him.